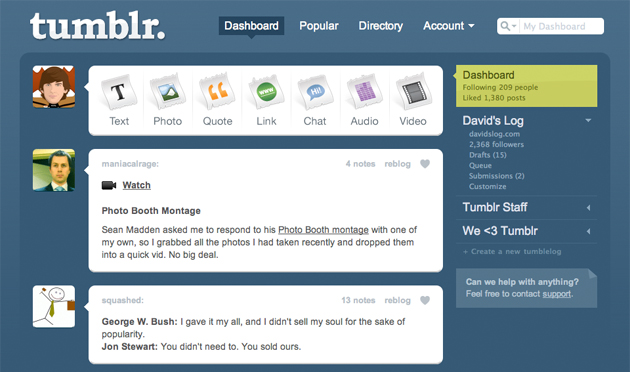 Tumblr has long been considered the quirkier, more informal little brother of the dull and text-heavy WordPress. However, as more individuals, brands and even publications have started tumblogging over the past few years, bringing the grand total of Tumblogs to more than 27,000,000, it’s clear it has a lot of benefits and a lot of different uses.

So just what does make Tumblr so appealing?

When you log into your Tumblr dashboard you’re greeted by the bright little menu bar at the top, which allows you add all kinds of content to your blog, including text, photos, quotes, visuals, audio and much more.

Not only will you be able to add all kinds of content, but Tumblr sorts out some of the annoying practicalities for you, like making your photos fit the width of your theme, or ensuring everything looks consistent.

This makes Tumblogging quick, simple and more visually appealing too.

However, the ease of publishing to Tumblr doesn’t just stop there, there’s also a bookmarklet you can add to your browser to quickly publish bits of content you see around the web and the same quick publishing functionality is replicated in the Tumblr mobile application, making it arguably one of the best mobile publishing apps for blogs.

The way you publish content to Tumblr is so appealing that developers such as WOO Themes are working on ways to make WordPress blogging much more like Tumblogging.

Community may seem like a bit of an airy-fairy point. After all, any platform with more than a few users can be said to have a ‘community’, right? But there’s always been something a little different about Tumblr and how passionate its users are about the platform.

I’m going to hazard a guess and say that it’s to do with the conventions and terminology those using Tumblr adopt that you don’t find elsewhere, notes means likes or hearts and comments, you tumblog or tumble. The fact there are different ways of explaining things could well mean that people feel more part of a clique. Or not. It’s just a theory.

The fact it’s super easy to re-blog things could also play a big part, as it makes it much easier to share and create content than on other platforms, which could lead to much more engagement.

I’ve also found that whatever topic you happen to be writing about, whether it’s something vast and popular like film and fashion, or much more niche, there’s a very good chance there’ll be a smaller, dedicated community within Tumblr itself which has a passion for that particular area too.

There’s also a focus on building a community for your specific blog, as you can change your settings so more than one user can contribute and submit posts.

Tumblr can be about creating your own content and writing lengthy posts, but it can also be about curation and re-blogging content from elsewhere.

This is beneficial for self promotion, as your content could easily “go viral” on the network if enough people re-blog it.

It’s also good if you’re looking for something other than just a regular blog, maybe a place to store snippets, collect quotes or even showcase your work.

Tumblr offers its users a crazy amount of themes, so WordPress really doesn’t stand a chance when it comes to pure aesthetics.

There are countless free and premium themes and although there’s a massive selection across the web from smaller designers, there’s also a pretty comprehensive library of themes available via the Tumblr website itself.

If you’re handy with CSS you also don’t have to pay a premium in order to make little tweaks here and there.

I’ve already touched on the versatility of Tumblr a little, pointing out that it can be anything from a wordy blog to a curation tool and I think this is one of the main appeals of the platform.

The themes are also geared up for different purposes, from those all about the textual content to those that have been built to act as a designer’s portfolio.

In this way you can also easily integrate Tumblr into your current ‘online life’. Many people seem to have a blog hosted on say WordPress and a Tumblog to supplement it, which is something we saw a lot from our feature earlier in the week about magazines and newspapers that use Tumblr.

Its versatility also means it’s an ideal option for all kinds of bloggers, from those that are new to social networking (how is that possible again?) to seasoned bloggers looking to customise Tumblr to the max.

So are there any disadvantages?

I realise this post is all sweetness and light, but I’m really convinced that Tumblr can work regardless of your blogging experience and how you want to use it. Cheesy, I know.

BUT, of course there are some disadvantages.

Depending on who you talk to there are those who think it’s not a serious platform, but as far as I can tell the main problem is that it doesn’t have its own built-in commenting system. This is clearly a bit of an issue if you want to facilitate discussion, but luckily external commenting system Disqus can be quite easily added into most Tumblr themes.

There have been a lot of issues with Tumblr experiencing large amounts of down-time. All online services have server issues and maintenance problems at some point or another, but Tumblr’s outage lasted for a good few days, which made a lot of people question whether it was really the right platform for them. As far as I know everything has been running smoothly since, but if you’re dedicated to updating your content regularly or want to use it to run a business blog or website, then this could well present a bit of an issue.