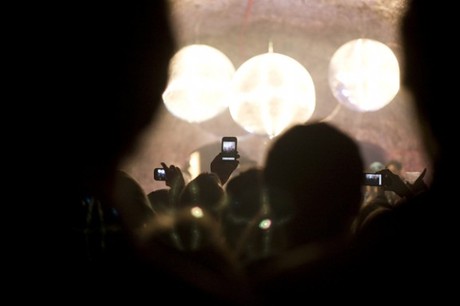 They have a record of censorship, but Apple are taking it to the next level by trying to control what you film on your iPhone. Why? It’s simple really – Apple sell you devices, but they also sell you music. They don’t want you recording music on your phone that you could buy off them on their iTunes stores.

So Apple have taken out a patent on a software technology that could prevent their devices recording live events like gigs. It would use sensors to determine what you were pointing your camera at, and could kill the application if it considered you were filming something Apple didn’t approve of. The device would work in venues or areas which had installed a particular infra-red sensor. Apple devices would be sensitised to the infra-red signal and it could over-ride user controls to shut down the camera app.

Videos of gigs often end up on Youtube, owned by Apple rival Google, where people consume a lot of music.

Still – it seems a pretty severe reaction from Apple, given that the quality of music recorded live on an phone is always going to be inferior to professionally recorded tunes. Is the company that made $70bn profits in liquid assets in the last quarter of this year really that troubled by this? Have they been pressurised by record labels into exploring this feature?

Will users stand for something that curtails the usefulness of their phone/iPod so much? How will Apple regulate or decide who gets to use the knock-out infra-red signallers? Can just anyone get one?

Though the feature hasn’t been confirmed, Apple are only looking into it, it’s one of the dangers of one company having control over so many aspects of an industry: it starts distorting a market to protect its interests in another one..