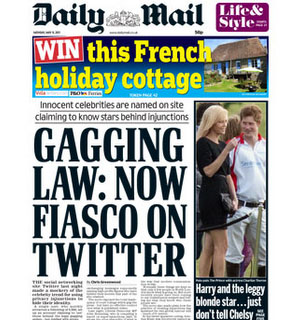 Legal experts warned that Twitter has made super-injunctions redundant, and there may not be any point in future ones if the naming of celebrities in tweets continues. It seems that either super-injunctions – or Twitter – could go down as the crisis comes to a head.

A twitter account set up to break the super injunctions and last night had 25,000 followers, right now – 9am Monday, it seems to have 1.. we expect the account will be swiftly removed…

It seems to got a reaction from one of the celebrities named in the tweets to get the mainstream to notice. A tweet suggesting that Jemima Khan had taken out a super-injunction to prevent some photos being published received this rebuttal from the celebrity: “Rumour that I have a super injunction preventing publication of “intimate” photos of me and Jeremy Clarkson. NOT TRUE!”. It sparked a front-page story in the Daily Mail.

Despite the jokes, it could be dangerous territory for Twitter – the establishment, especially the legal establishment may well decide to favour the laws they have made in the face of Twitter making a mockery of them. We’ve seen it before in the Twitter Joke Trial case…

The Twitter Joke Trial: What Does It Mean For Freedom Of Speech

As the Mail thunders: “The move exposed the total inadequacy of court rulings which gag the press – but have no effective control over what is published online.”

But the legal repercussions for Twitter could be huge. How on earth could they control what users tweeted? Would users stand for it? What about users in different countries to the super-injunction.