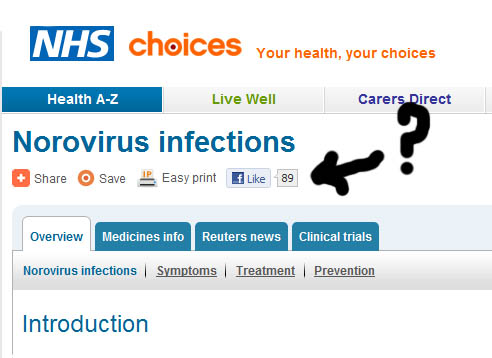 The NHS have made unfortunate use of the Facebook Like button, by putting it on their disease profile pages. That means that you can officially “like” the norovirus.. and 89 people have. See above.

Facebook have been pushing out the like button to webmasters around the world – encouraging everyone from online retailers to bloggers to use the like button as a way to bring their webpages to wide audiences on the social network.

Like is a fine word for social chit-chat – you can like your friend’s comment about Saturday night – but something more neutral like “share” or “recommend” is needed for more serious stories. Or other pages where it’s inappropriate to express “like”. You can customise the word expressed in the Facebook widget though the little thumbs-up icon remains the same. All buttons now perform the same function of posting a link complete with a thumbnail picture to the user’s homepage.

You could argue that the 89 people who clicked “like” on the NHS Norovirus page are actually liking the advice given rather than the virus itself. But that’s not what it looks like… It just looks like they’ve liked the seasonal vomiting bug.

There’s a similar problem with news stories – which are predominantly negative – earthquakes and wars and so on. “Like” just isn’t the right word to express interest in the story.