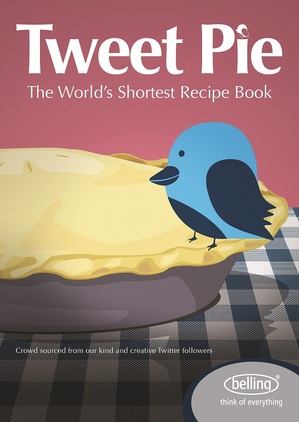 A social media agency are crowdsourcing a cookbook on Twitter – and all recipes are to be 140 characters – or less.

That’s including the name of the recipe. Here’s their recipe for Roast Beef:

Short and sweet huh. Though I have to say that I got stuck on “crv” for a few minutes. (Carve, of course).

The book – Tweet Pie – will be sold in aid of FoodCycle, a charity that redirects edible surplus food thrown away by food retailers, to create nutritious meals for people affected by food poverty.

It draws on the existing Twitter tradition of Twecipes – where friends share very short one-tweet recipes with other. Like with so much else on Twitter, the art is in getting a lot of information across very succinctly.

Here’s the risotto one:

Umpf compared a few more traditional Roast Beef recipes for length and found that Delia’s recipes were far and away the longest: her Roast Beef entry being 872 words, with Nigella’s the second longest at 787 words.

To enter, tweet a recipe including the hashtag #Tweetpie and the best will be published in the book out later this year. A full glossary of Twecipe terms, hints, tips and Twecipes from the experts is also available at http://www.belling.co.uk/twecipe.

Unfortunately the hashtag takes 9 letters out of your recipe. Watch out for that…

A charity is about to publish a recipe book crowdsourced from Twitter. The USP? all the recipes are 140 characters or less.