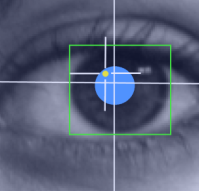 Soon you’ll be able to control a computer by just looking at it, according to Swedish company Tobii who have paired up with Chinese computer makers Lenovo to make a prototype eye-controlled laptop.

They unveiled the eye-controlled computer at CeBit today – there are only 20 models in existence split between the research labs of Lenovo and Tobii, but the CEO claims that the technology could be in mainstream consumer computers in a couple of years.

Using eye-tracking technology and a webcam, the user can point, select and scroll by just moving their eyes. Other computer controls can be tuned to your eyes – focussing on a particular area could make the screen zoom for example or battery power could be saved by dimming areas of the screen that you are not looking at.

They say that the experience of controlling a computer with your eyes is “thrilling” – we’re a bit worried that it would go bonkers and start pressing loads of buttons when you did something unintentional like rolling your eyes or casting sidelong glances at your colleagues. However we assume they have cut some slack for natural eye motions and that you can switch off the controls if necessary.

Tobii are certain that eye-control will go mainstream soon –

“More than anything else, the Tobii laptop prototype is proof that our eye tracking technology is mature enough to be used in standard computer interfaces. To reach a state where the technology is part of the average computer, we need to make it smaller and cheaper. We believe that this can be realized in a couple of years by partnering with the right manufacturer,” comments Henrik Eskilsson, CEO of Tobii Technology.

There’s been a huge boom in natural user interfaces the past few months with the release of the Microsoft Kinect – this technology will only accelerate that trend. Tobii suggest it could go way beyond the laptop too…