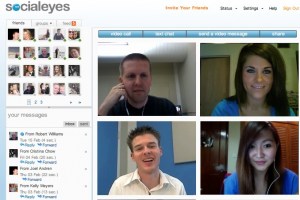 There have been several apps that aimed to kick-start video-chat on Facebook see our story on Chatville: the app bringing Chatroulette to Facebook – plus compliments, minus cocks – though it looks like the app has flatlined out at about 6,000 users after an initial period of excitement last Spring.

Still – video chat on Facebook is a good idea – if only a service could get it right. Social Eyes reckon they have. The US start-up which runs as a standalone website and a Facebook app, has pulled in $5.1 million in funding

Their trick – letting conversations be built around groups and shared interests. That’s where Chatville went a bit wrong: it linked to your Facebook profile so it wasn’t totally random like Chatroulette – which meant it lost the anything-goes thrill and the focus on your Facebook friends didn’t really work because I didn’t want random video chat with my Facebook friends I’d phone them or skype them if I wanted to talk.

The trick with Social Eyes is that it organises random video chat around groups and around interests… so it’s not just the naked-strangers of ChatRoulette, nor is it just your Facebook friends who you see anyway. It’s people who are also from Sao Paulo or who also love golf / Glee / who are going to Amsterdam for Orange Day. You can set up groups and link them to groups on Facebook and Twitter. That’s interesting, and that could work. It would be like an accelerated friend discovery tool and would allow for deeper and more personal interaction than twitter.

A nice feature is the group chat screen – aka a scrum – where everyone from a particular group shows up on one screen together and you can dip in and out of what they’re saying or move back into a private chat.

They say:
“SocialEyes is a social video service that instantly connects you to your friends and to groups of people who share your interests. This is a beta release of our service.”

The beta tag might account for some of the problems I’ve had getting the service to work – the usual problems that you get on Skype with video feed, and poor sound quality.

The big problem
The big problem is not technical, unfortunately for Social Eyes. It’s that when Facebook get round to making their own video chat application it’s going to squash pretty much any third party apps in that space… And it’s almost certainly a question of “when” not “if”.

Still in the meantime, if this could get some momentum behind it, it could work as a video-focussed version of Twitter…