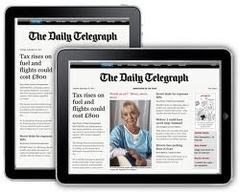 All the hot air about iPad magazines and iPad newspapers has hit some hard statistics.

British newspaper The Telegraph released an iPad app of their newspaper in September 2010, but stats from WAN-IFA show it was accessed on average 7 times a month by users, usually when they couldn’t manage to buy the paper copy of the Telegraph.

The average age of the user was 47. The research on WAN also found that the devices were being left at home or at work – not being carried everywhere.

Telegraph head of mobile product development – Tim Rowell – said that: “People are realising that the iPad is not yet a direct substitute for the newspaper – but they’re arguably complementary”.

Most interesting perhaps was a quotation from WAN-IFA: “Advertising agencies and clients see the iPad app as a web product while newspapers see it as print.”

Any thoughts – ever bought an iPad newspaper?

One thought on “iPad newspapers – mixed messages about their success”