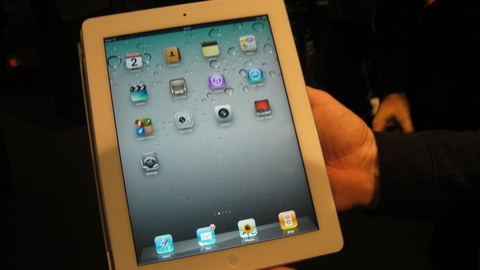 Steve Jobs getting back on the stage was the biggest surprise for me, but I did like it. And just because some of these changes were expected.. doesn’t mean they weren’t sweet.. However, just writing them up I was surprised how many of them are quite superficial – a case- really? ANYWAY to the guts of it…

1) It’s thinner
YES I know – we were all expecting that. But it’s lovely

2) It has rear and front-facing cameras
Yes. Finally. As one of the Apple presenters says – that makes it really good for Facetime – no shit. It does look great for Facetime.

3) It now comes in white
Looks nice. And white devices will be available, from launch, in stores everywhere.

6) Battery life is still 10 hours
Despite slivering the thickness of the device, the battery is still as good and lasts up to 10 hours. Steve said that blew his mind. But then lots of things seemed to blow his mind. It is good.

7) You can buy a sweet magnetic blanket for it
Apple, for some reason, have spent a lot of time developing a nice case for this iPad. Jobs said: “it’s not a case, it’s a cover, and it’s not just a cover, it’s a smart cover.”

8) There’s a HDMI out port accessory
For people who want to stream their iPad screen to their TVS – they now can. They just need to shell out $39 for the little white cable. App

10) Faster 1.2Ghz Processor
The new dual-core A5 chip means processing power is double the speed and a new graphics card makes the graphics 9x faster – that’s big for games. The A5 is 1.2Ghz, bumped up from iPad 1’s 1Ghz.