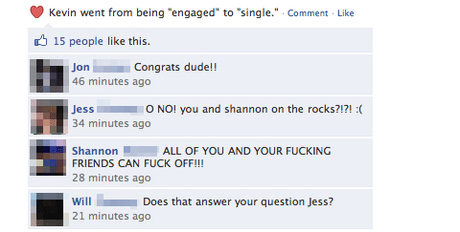 Facebook has shut a controversial app that allowed you to track when your friends changed their relationship status. Breakup Notifier got media attention at the beginning of this week, got 3.6 million users according to the timesofindia

The app which we wrote about here – The Facebook Break-Up Notifier: Helping you make the most of your opportunities – alerted when anyone on your *stalk list* changed their relationship status. You’re just going to have to check their profiles more often instead.

The problem might be fixable though, it seems that Facebook doesn’t object on principle, but only because of the popularity of the app and the amount of demands it was making of the API.

“To ensure positive user experiences on Platform, we run routine automated screens that take user feedback, machine learning and various algorithms into account and remove spammy applications. For example, if an application is making an inordinate number of stream.publish calls and receiving a large number of user reports, it may be removed by our automated systems to protect the user experience and the Platform ecosystem.”

One thought on “Facebook shuts down Breakup Notifier the relationship tracker: back to old fashioned stalking”