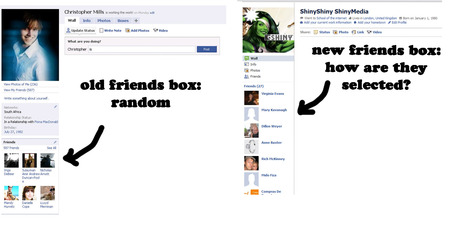 Facebook revamped profiles earlier this week, and launched a bunch of new features, but one of the most surprising things hasn’t even been announced – a feature that lets you know who has been clicking on your profile.

Okay, I’m basing this on personal observation, but bear with me. There has been a “friends” box on Facebook profiles for a long time – down on the left hand side of the page under your profile picture and basic information. Previously that small square box was filled with six random friends, and I remember they were random. I’d occasionally hover over one and wonder who the hell it was? Then I’d remember it was Jay from some random holiday 2 years ago. It would pop up with people that I was friends with but never clicked on and had completely forgotten about – it was random – sure and I never particularly noticed a pattern in who turned up there.

No longer so random

Thing is – with the new profiles that list of friends is no longer so random. It now displays 10 friends not six, and you only need to refresh your profile three or four times to see that the same group of people comes up again and again. Out of my 421 friends, the same 15 come up again and again – in fact after refreshing my profile five times I don’t get any new faces and after refreshing it ten times it just keeps showing me the same 15 rearranged slightly.

Okay you say – so that’s just people you interact with the most, Facebook is just giving you links to people you are most interested in, same as it does with the news feed where it pushes people that you click on and interact with most.

But, no – it isn’t. Of those 15 people, 5 or so are people I interact with regularly, the other 10 aren’t. And I don’t regularly click on their profiles either. Sure once every so often… but there are others I would check much more regularly.

Three I haven’t messaged, interacted with or even clicked on for up to six months.

Why do those friends turn up there?

I don’t mind remotely, but it kind of makes me wonder why they are there and why Facebook isn’t clear about the process that selects those 15 out of my 421 friends. I realise you can make lists of friends which show up in that spot, but I haven’t done that.

If it’s not public interaction, and it’s not random then it’s got to be something else. The the most obvious solution is that these are people who click on my profile a lot.

As one of my friends said: “these two girls keep turning up on my friends list – but they’re not people I interact with on Facebook – so I think they must fancy me..” Just to throw another scenario out there – you can see that your ex has been clicking on your Facebook profile a lot even if neither of you have talked or interacted on there for months.

What’s more – it’s not just me who can see it – any of my friends visiting my profile can check that out, refresh my page 10 times and find the 15 people who are most interested in me.

Who is that girl you don’t know turning up in your partner’s top 15 friends – are they checking their profile a lot…?

I’m going to stop with these examples, but you see what I mean. If I’m correct, Facebook is finally releasing information about who is clicking on whose profile, it hasn’t announced it, and if it is, then it’s an encroachment of privacy.. and it could change how people behave on Facebook, as you would restrict your clicks because you know other people are aware of what you’re doing.

If there is some other reason – I would love to know it – please tell me in the comments.

You’d better install one of these VPN services for Facebook for excellent protection and fast connections.

UPDATE:
The Facebook press office emailed me to state that the friends list on the new profile is categorically not down to who is clicking on your profile. According to their statement – it is organised according to who you have had the most public interaction with in the past month and a half.

“The Friend’s list default view is now ordered by the amount of public interaction you have with the friends in your network. When you navigate to your friends page you will see up to 50 friends with whom you have had the most public interaction within the past month and a half. These friends are displayed in a random order. The order will change every time you refresh your friends page. An alphabetical ordering of friends is still available by clicking on the second list icon to the right of the “Search friends.”

Does that ring true for your experiences? We’re still scratching our heads though, because though that makes sense for 10 of the 15 in my friends list, I swear there are at least 1 or 2 I definitely haven’t contacted in the past one and a half months…

UPDATE 2: The Response of Readers
(thanks for comments below, these are some more comments from FB and Twitter)

>>”I think you’re dead right about new Facebook. definitely some unexpected people showing up in my friends list who would feasibly be looking but I don’t have much contact with and have very little “public contact” with anyone who’s appearing.
(BTW I am totally showing up on a few girl’s profiles that I perv over semi-regularly)”

>> “I didn’t find this to be the case on my FB. Entirely random. Only consistent person who came up in 15 refreshes was my husband.”

>> “That’s entirely untrue. There are a number of people who come up repeatedly with whom I’ve never interacted with on Facebook, and certainly not in the last month an a half.”

Related:Tracking clicks on Facebook: the scams, the apps and whether we want it?