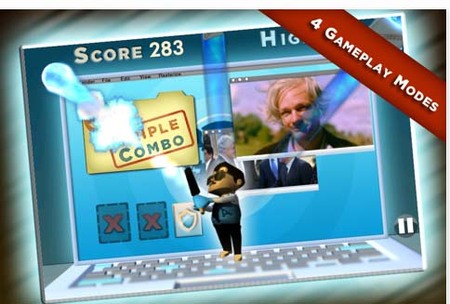 Of course it wasn’t going to be long before someone decided to turn the rollercoaster story of the world’s largest secret-busting website into a game.

Well it is a game, an app game. However, rather than being the information outlaw Julian Assange, busting open the secrets of government and big corporations, you play the part of a US security agent who has to stamp out the dangerous leakers, before some US politicians get embarrassed. As the app puts it:

“stop leaked diplomatic cables from getting onto the internet, where they will cause unforeseeable damage to America’s reputation!”

That sounds a lot like bumping off a certain Australian, the aforementioned Julian Assange. However we would like to stress that it is *just* a game. A game that is free in its “lite” version.

The game-makers Super Boise sound sort of terrifying, “chock full of grit and hell-bent on crafting the best slice of gaming your starved mind has ever tasted.”