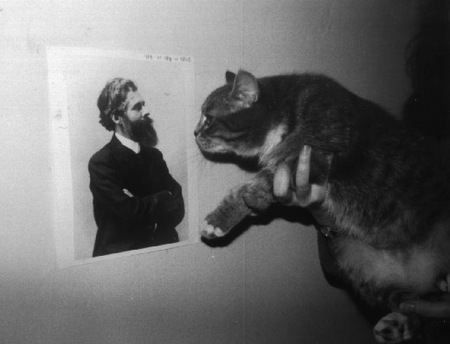 Errr. So I know it’s the week of the world’s major gadget fair, CES 2011… but, we just thought we should take some time out to tell you about important scientific research done on cats.

Here’s the premise and the methodology:
“Cats were exposed to photographs of bearded men. The beards were of various sizes, shapes, and styles. The cats’ responses were recorded and analyzed […] 214 cats participated in the study. Three cats died during the study, due to causes unrelated to the bearded men. Fifteen cats gave birth while viewing the photographs.”

The conclusion is even better:
1. Cats do not like men with long beards, especially long dark beards.
2. Cats are indifferent to men with shorter beards.
3. Cats are confused and/or disturbed by men with beards that are incomplete (e.g., Bork) and to a lesser degree by men whose beards have missing parts (e.g., Crafts).

This sets my spoof bells a-ringing, but it’s a cracking read, and until I hear some cold hard scientific evidence to the contrary about the behaviour of cats around beards, I’m going to believe it.

Read the rest on Improbable Research.

One thought on “Scientific Research: How do Cats react to Bearded Men?”