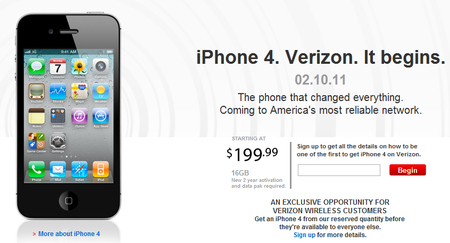 US phone network Verizon have finally won the right to sell the iPhone on their network, after breaking the monopoly AT&T had on the device.

They’re flagging up their reliability as a contrast to competitors AT&T who have faced many complaints about lack of signal.

But it won’t work on Verizon’s super fast LTE 4G network. “The first gen LTE chipsets force design changes we wouldn’t make,” said Apple’s Tim Cook. “And Verizon customers told us they want the iPhone now. I can’t tell you the number of times we’ve been asked, ‘when will it work on Verizon.'”

Yes, Brits, this doesn’t make much difference for us…. we already have a choice of carriers for the iPhone in the UK – 5 in fact.