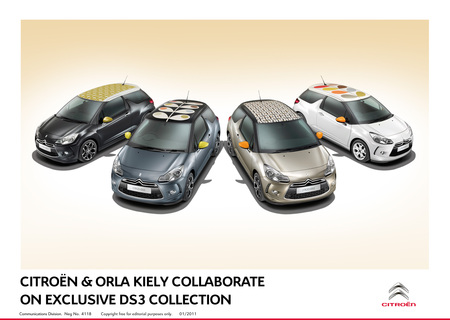 You may be more used to seeing those little acorn and stem designs from Orla Kiely on pencils and laptop bags, but Citroen have just gone and pasted them all over a car. A car which you, dear reader, can go and buy.

Though they mocked-up a wrap-over patterned car for the concept model, what will be in car shops around the country is a little more subtle.

We had the pleasure of giving the Citroen DS3 by Orla Kiely a quick once-over this afternoon.

There are two designs – the acorns and the stems, and each pattern comes in two different colours. And rather than just swaddling the whole car in the design, the DS3 is filled with little details that refer to it: that means customised leather headrests, coloured rearview mirrors and branding on the floormats and the roof. 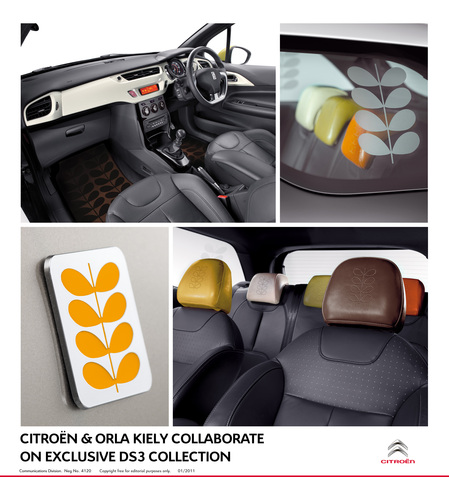 We talked to Melina, now digital head of Citroen, previously a product manager who was involved in getting Orla Kiely on board. These are some of the things she said to us:

>>Citroen chose Orla to collaborate with on the DS3 because she appeals to a female audience. Factory-made stuff can be very masculine.

>>Designing the Orla Kiely DS3 was about finding the right balance between the constraints of the fashion and design world from her perspective and the constraints from our side on what the factory could do.

>>Both Orla Kiely and the DS3car designer Mark Lloyd had been to the same university – London School of Arts.

>>The DS3 Orla Kiely has to be a car you can live with, 6 months and 3 years later, not just something that makes a statement. So we didn’t want to put the pattern everywhere, and Orla thought exactly the same – it’s in the details, it’s all about the details..

>> Orla has produced a whole range of products – she started out doing hats for Harrods, and now does everything including socks. She has her own world. And the car now goes with it. It’s not just something that takes you from A to B, it’s about the atmosphere and surroundings and you can now take that with you wherever you go.

Some beauty shots below… Check ’em out: