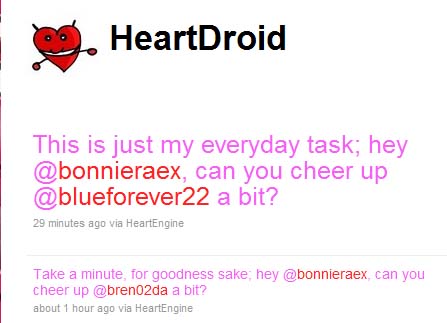 One of the nicest features of Twitter is the way it lets you meet and interact with people that you wouldn’t meet IRL. It goes further than Facebook because there’s an open culture of following and chatting to people you wouldn’t meet in real life. And an Amsterdam developer has just taken that one step further.

Anthony Maës has just made a little Twitter bot which matches up random tweeters in a simple but kinda cute way: by pairing people who are happy with people who are sad.

Called HeartDroid, it scans Twitter for tweets revealing either happy or sad emotions then matches up the two tweeters and suggests that the happy one cheers the sad one up.

Anthony says “it’s just a tiny script I made in a couple hours last Wednesday night” and it comes from his interest in robots that can feel. Yes. Feel.

We did a quick interview with him to ask about what HeardDroid does and why:

Q: I like that it’s a way of bringing people together. Why did this idea come to you?
The idea of feeling-capable robots has haunted me since my early interests in programming when I was a teen.

One year ago, as I joined the milieu of start-ups and augmented reality with Layar, I opened a Twitter account and I discovered all the bots living on the platform. I also discovered that a lot of users expressed their feelings openly; and I was stunned the day I found We Feel Fine.

The other day, as I was showing xkcd to a non-nerd friend, I stumbled upon this comic.
Then I thought of a bot that would find sad people on Twitter and try to be nice to them.
The day before I had discovered Amazon’s Mechanical Turk; showing care and support is clearly a task a computer can’t do. Thankfully, Twitter is also full of happy people who surely wouldn’t mind sparing a minute or two for a good cause.

Even though I had never programmed anything for Twitter, it turned out to be fairly simple. I skimmed the documentation and in a couple hours the first version of HeartDroid was up and cheering. I couldn’t have gone to bed before it was done anyway :)

Q: How does it work?
Yes, it’s automated. The frequency of the tweets is partly random, I wanted the time of the next tweet to be unpredictable. At the moment, on average, 1 tweet is sent every 40 minutes.
The software looks for somebody happy and somebody sad, using Twitter’s tweet search feature. I do a keyword search and then filter and rank the results. I change the keywords from time to time to achieve better results. In the first version, I was naively looking for “sad” and “happy”; tweeting “happy birthday mum!” or “sad kitteh is sad xD” made you eligible for a mention.

Q: Have you had any feedback on it?
I check http://twitter.com/#!/search/heartdroid often to see responses.
I don’t get much feedback except from my close array of friends; most of them don’t use Twitter but get the point. About one in 10 users answers. Most of them are like “Awww”, “Thank you” or “LUL WTF”, but I’ve seen 3 or 4 pairs establishing contact.

—-
In conclusion, I’d say that the phrasing could do with a few little tweaks to make people feel more surprised and joyed by these random connections, and perhaps not so surprised. But it’s a cute idea using a bot to match people up who could be compatible. I expect to see more of this kind of thing.