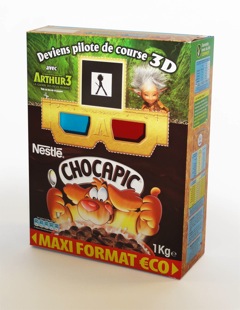 We know Augmented Reality is popular right now, but we can now officially say it has gone mainstream with the arrival of AR in breakfast cereals. Nestle have launched a thing with their Chocopic range of cereals in France where 3D glasses you cut out of your cereal packet will let you open up and control a web game, it’s also a collaboration with kids’ film called Arthur 3.

It uses the same simple web-cam and image recognition tech that we saw on the front cover of Grazia magazine a while back. All you ever wanted to know about it is in the video below..