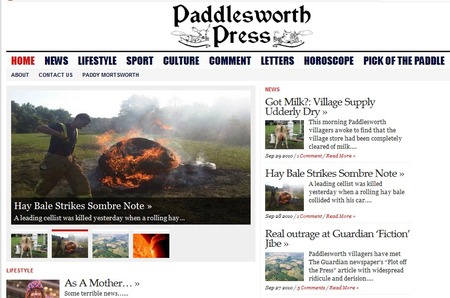 Paddlesworth Press is a spoof village news website – with a twist. Not only does the website take the name of the real village of Paddlesworth in southern England, but the entirely fictional ‘villagers’ that post articles on the site also have their own social networking accounts, blogs and even the odd song on Audioboo.

According to co-founder Stephen Eisenhammer, Paddlesworth Press challenges our idea of authenticity on the web:

“In the last few years, the internet has often been perceived to be tied to reality,” he told the Guardian on Monday. “There is a certain amount of trust in the online space, and trust in the things that are detailed on that space. And, in part, this project is exploring how that trust is misguided.”

But were we ever really that misguided? Did we need Stephen Eisenhammer to tell us not to believe everything we read on the internet? Spoof social-networking is not a new idea – before Facebook cracked down on fake accounts, you could be friends with anyone from Jesus to Osama Bin Laden. Twitter is also awash some pretty hilarious nearly-real accounts, as anyone following recent hit ‘CatBinLady’ will know.

When I googled Paddlesworth, I have to admit I was pretty impressed by the amount of groundwork that had gone into the project – before I realised I was reading the genuine archaeological records of the real area of Paddlesworth, in Snodland, Kent. That’s right, Snodland. A spoof website has its work cut out when reality is already coming up with comedy gold.

And that’s the problem with Paddlesworth so far – although the site design is remarkably slick, the content is disappointingly low on lolz. Maybe that’s because the focus is on plot: the site launched on Monday with the ‘scoop’ that solar flares will destroy the earth in December – setting up a ten-week story arc in which village tensions can unfold. Essentially it’s The Archers, but online and with added apocalypse.

Still, the secondary sites make more interesting reading. Poking around a character’s Facebook page and watching the villagers bickering on each other’s walls is pretty addictive – it’s like stalking Facebook friends you hardly know, except it’s socially acceptable. And with all the usual profile page info like favourite quotations, interests and employers, it turns out Facebook is a pretty neat way of presenting characters.

So what do you think? Is this “mixed-media collaborative novel” blurring the boundaries of fiction and reality, or uh have we been used to this kind of thing since the first podgy middle-aged man used a picture of a manga character as a profile picture on liveblog?