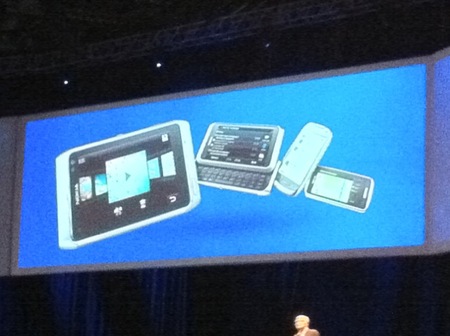 They still bestride the global phone market and you’ll find their devices in the hands of millions in the fast growing markets of China, India and Brazil. But Nokia are desperate to regain their position at the top too. Fairly or not, the media story has been one of decline, a formerly top notch company that has lost its position on the pinnacle.

The opening keynote speeches at the Nokia World Conference this morning were rallying cries “Nokia invented the smartphone!”, “symbian os is the biggest in the world!”, “we’ve sold more smartphones than Apple and Google put together”. But one of the ironies was that instead of being delivered by the CEO, the VP of Sales had to step in to take the key speech because Olli-Pekka Kallasvuo, their leader for 10 years has just been given the sack. The second speaker, also from the old-guard Finnish backbone of the company is resigning within a matter of weeks too.

So they might be gone, but the company, we’re told is back. Looking to regain the days when they were top of the desirables list and had the scandinavian cool factor.

There were no announcements about devices on their new top end Operating System Meego, it was all about Symbian today and three new devices were launched on the platform.

As more affordable variations on the lovely N8, the C7 and the C6 look good and we like the idea of the E7, though felt that the software didn’t quite match up to the great screen and booklet-like QWERTY keyboard. Reviews to follow…

They’re nice and the N8 is a treat but the new announcements are going to be knocking Apple or Google off the top spot yet.