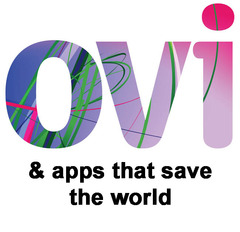 While Apple and Android are streets ahead of Nokia in the important field of mobile phone apps, Nokia claim they’re not playing the catch-up numbers game with app stores. They are making apps that save the world.

Nokia came late to apps, and they’re still dragging their feet a little – the Ovi app store is not big, and integration with different handsets can be clunky. Still what’s a clunky user interface when you’re saving lives…

While Apple and Android apps have reputation for doing every weird thing under the sun – from telling your fortune to making your photos look like they were taken on a 60s polaroid – Nokia spent a lot of Nokia World 2010 Conference telling us about how their apps save the world.

Developer CEO highlighted humanitarian apps they have produced in countries where they are almost the only handset providers – in India and in China. And though sadly I didn’t record the speech, I’m sure at one point she said that their apps have saved thousands of lives. That cannot be said for Hipstamatic.

Sure they did give us a five minute presentation on Angry Bird the game, where you have to squish some pigs who stole your eggs… but that aside, worthy and humanitarian apps were the order of the day.

1) An app which helps immigrant workers in China (of which there are hundreds of thousands) to find work by providing job listings over mobile.

2) An app which helps mothers in Africa check if the medicines they are being sold are real or counterfeit. (don’t know how this one works, we’ll look into it).

Other uses included simple things like making the knowledge in wikihow into an app and allowing for banking transactions. Nokia emphasised that they are encouraging developers to make apps in local languages that can be paid for with local currencies. A lot of these apps run on simple Java features phones.. so they’re not complicated technically but they do provide information where it’s needed

To be honest I think this sort of stuff is fantastic and increasingly important.

But with apps Nokia still need to convince in the top end of market too… and show that they can compete in markets where there are other strong companies.