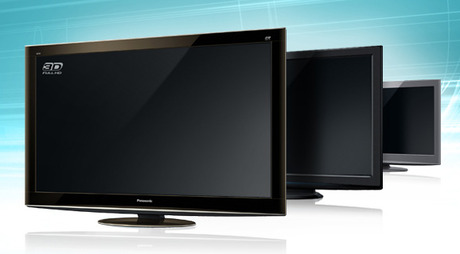 It’s all about 3D for Panasonic’s 2010 IFA line-up and they’re releasing three additions to their glamourous flatscreen VIERA TV range. All show three dimensional images and they’re all are huge – two at 42 inches and one at 46 inches. There’s a pair of LCD screens and then one plasma panel in their current offerings.

LCD models first – the 42″ (42VT20) and 46″ (46VT20) models promise crisp and immersive 3D images and come with two sets of 3D eyewear. Obviously you’ll need to buy a few more if you want a third or fourth person to watch it too. Hard work has gone into a technology which smooths blurring.

Panasonic’s third new 3D TV is a plasma one – the 42inch TX-P42GT20 – offering most of the same features, just with the advantages of a plasma panel. Unlike the other models in the VIERA VT20 series, the TX-P42GT20E does not come with 3D eyewear.

Panasonic have also taken on board how big 3D will be for the gaming community and have partnered up with game-makers Ubisoft to get some top-quality three dimensional games on their customers’ screens. First up will be Shaun White Skateboarding coming out sometime in December.

See more on the TX-P and VT20 ranges at Panasonic