It’s all about 3D for Panasonic’s 2010 IFA line-up and they’re offering a neat little consumer camcorder to let people record their own 3D films. 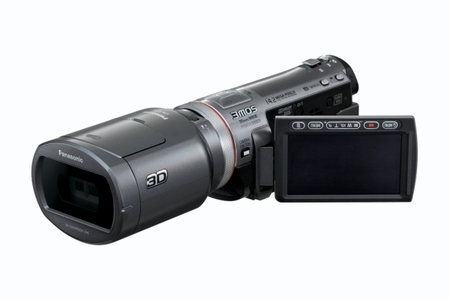 The SDT750 is a barrel-shaped HD camcorder with a lens from top German company Leica. It can shoot it 2D or 3D film. As with most consumer 3D cameras, it works with a double lens which shoots two streams of film simultaneously, with the results combined in-camera to produce high definition three dimensional images.

The 3MOS sensor system makes it work better in low light, and it also has image stabilisation system on board HYBRID O.I.S. which corrects handshake and blurring.

In 2D mode it has 12x optical zoom, though the 3D camera can only shoot in a more limited focal range. There are lots of manual control options and a range of output ports, making this suitable for ambitious and knowledgeable film-makers.

There’s a 3 inch LCD screen for playback on camera and it comes with an HDMI out cable and the 3D output can be watched on a 3D HDTV with specialised glasses.

Not only are they releasing a new consumer level 3D camcorder -they’ve also put out the editing software to go with it, by partnering up with software makers Magik.

More on the SDT750 on Panasonic