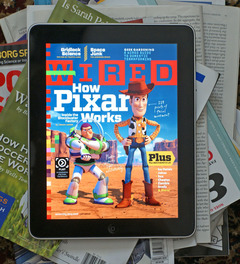 Interesting side point from Jeff Jarvis over on Buzz Machine today, in a post counselling magazine magnates how to steer their empires through the crisis of print.

It was a warning about Steve Jobs and falling for the iPad. Sure it looks pretty, Jeff points out, but it is not the saviour of magazines.

3) about the same size as a magazine with a beautifully visual screen, magazine pages do look great on it.

Why the iPad is not going to be the saviour of magazines
1) the platform allows magazines to drop their content straight onto a screen without having to restructure to fit the internet. Graphics that spin are nice, but it will take a significantly bigger shake-up to make them truly use the capabilities of the internet. That means more real-time content, more interaction with readers, more links, more webbiness.

2) on the iPad, magazines aren’t just competing with other magazines as they did on the newstand – they’re competing for the user’s money with films, songs, and ebooks. Oh yes, and they’re also competing with lots of free writing on the web browser of the iPad, the whole internet in fact…

3) Steve Jobs isn’t looking out for anybody except Apple. Even over relatively simple issues like magazine subscriptions, iTunes has been inflexible and difficult.

Related: Wired iPad magazine review – we have (sort of) seen the future
The iPad can multitask! as a plate..
and Gallery: iPad magazines

One thought on “Why iPad won't be the Saviour of Magazines”