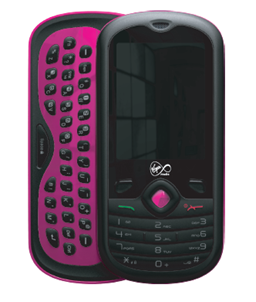 A chunky feature phone with a slide-out QWERTY keyboard, the VM202 from Alcatel is not exactly going to trouble the iPhone, but it does look like a decent sturdy mid-range handset. Alcatel is a French-Chinese company which aims to produce phones for all over the world, probably a company to watch given their foothold in the world’s fastest-growing consumer market.

On a pay as you go deal exclusively with Virgin (for the first month) this is pretty cheap.

It has internet connectivity with Facebook and Twitter Widgets. The browser is the speedy Opera Mini. The VM202 also has a 4megapixel camera which shoots video.

One key asset is the large storage space afforded by the handset. Virgin are packing a 8gb micro-Sim card in with the phone.

Details of Virgin’s Pay as you go deals can be found here. They include unlimited internet for 30p a day.

The VM202 handset will be available from Virgin Media stores and online at www.virginmedia.com for £39.99 including 300 free texts when bought with £10 airtime on pay-as-you-go.