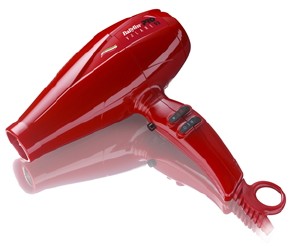 I’ve often wondered what the point of Formula One was. All those little jumped-up buggies going round and round and round in circles occasionally killing people. A lot of brain-power, money and petrol goes into making those pieces of metal go faster and faster. Anyway, they have finally put some of that bleeding-edge technology to good use by putting a Ferrari engine in a hairdryer. In the new Conair BaByliss Pro Volare to be precise.

The new hairdryer is the world’s first professional luxury hair dryer driven by a Ferrari engine. The dryer has been constructed out of Ferrari engine parts to maximize its airflow for fast drying.

At a cost of around $400 though, it’s really only one for the professionals. Or people who just really like Ferrari-branded personal grooming products.