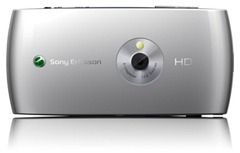 This week, I got my paws on Sony Ericsson’s Vivaz. With HD capability – and a nice new curvy design – I wanted to know whether it pulls off the multimedia magic we’ve all been promised.

First off: looks. Much has been made of the ‘human curvature’ design, and it’s not exactly been a universal hit. But I like it, actually, and certainly don’t think you’d be ashamed to take it home and introduce it to your mates. However, while I like the fact that it’s lightweight, the casing does feel a bit flimsy – taking the back off to get to the battery and SIM is a bit fiddly, and I was worried that it might snap with a teeny bit of pressure. The 3.2 inch touchscreen looks great though, and buttons are kept to a minimum (I was particularly pleased to see the camera shutter button, along with a video button, along the edge – much nicer to use than on the touchscreen itself, as in the iPhone).

However, I was disappointed upon opening the box to be presented with: a stylus. I’d vainly hoped there wouldn’t be the need. And I wasn’t particularly convinced with the thing when texting – the handwriting feature wasn’t quite as responsive as I’d hoped (I got lots of ‘hollo’s, even with my neatest handwriting), while the mini and full-sized QWERTY keyboards had me wishing for something in between. I did also struggle to see the screen properly when outdoors (just occasionally) as there seemed to be a bit of glare even on days that weren’t particularly bright.

Web browsing was nice and easy though, and the 360×640 pixels make sure your picture is sharp and bright. I must confess, despite regularly trying to ditch the stylus I kept having to pick it up again whenever I didn’t get the response I wanted.

But, I hear you cry, what about the camera? Well, this is where the Vivaz starts to show off a little. With 8.1 megapixels, face and smile detection helps to make sure you get the snap you’re after. And having the hard button on the side means it’s easy to grab a picture even in those blink-and-you’ll-miss-them moments. We thought that video quality was great – it’s certainly a good idea for anyone who wants to be able to grab some footage or pictures whenever they like, and upload them straightaway to YouTube or Picasa. YouTube (along with Facebook and Twitter) is preinstalled, too, alongside iPlayer and other video services, meaning your favourite videos are close to hand.

Ultimately, I had mixed feelings about the handset – it’s stylish, perhaps a bit specialist, but could be so much more user-friendly in terms of the interface. For the average user, the Vivaz might just be a bit fiddly for everyday use. But for multimedia fans who take pictures and movies regularly, it’s not bad at all.