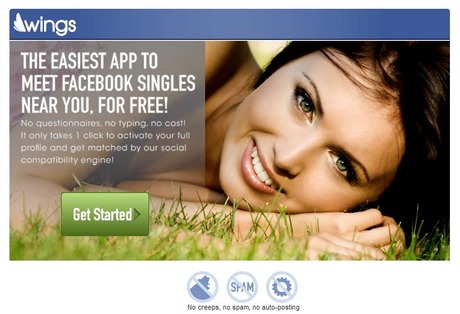 There have been dating apps on Facebook for a while: Zoosk, Are You Interested and Flirt Wall for example, indeed some would consider the entire network of Facebook to be a giant date facilitator.

However another one officially launched today – Wings – which has a more comprehensive approach to finding you a date. It’s all about data. As well as what you fill in on their from – your age, orientation and what your interests are – Wings asks to suck in all the data from your Facebook profile, then your Foursquare, Netflix (the American LoveFilm) and Twitter if available.

It crunches pretty much everything you’ve ever written on a social network to work out your compatibility with a potential partner. All it needs now is access to your most listened to lists on Spotify. The idea of course is that cultural stuff that you choose will help people work out

Wings just launched yesterday but it has been going for a month and has already got 39,000 users.

“Wings is the fastest, easiest way to get matched with Facebook singles near you! You’re only 1 click away from activating your full profile and meeting perfect matches for FREE!”

“Extremely long signup flow and not enough users to get good matches yet…same issues as most of the dating type apps on Facebook.”

We say:
We agree with Avichal there still probably aren’t enough people on the app to make it great, or on Foursquare or Twitter to make the extra networks really pay off. Some people will be put off by the amount of data collected by the app. For the narcissists out there (I include myself) it provides some interesting graphs and data on what your social networking profiles say about you.
eg: your average friend is female, single and older. See profile page below. 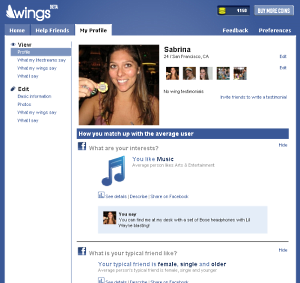