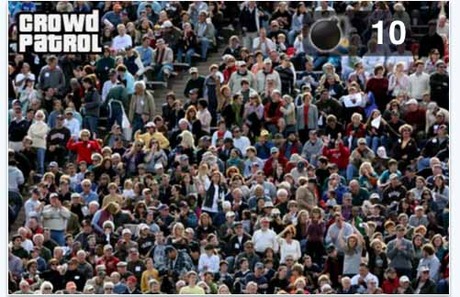 You look at a crowd of people – in a stadium, a shop, a station. Your eyes scan the masses, some moves a little awkwardly, maybe they’ve got backache or maybe.. they’re hiding a bomb!! TERRORIST! SHOOT THEM SHOOT THEM!

It has the dubious distinction of having reached No.1 app store spot in, Jordan. Erm, great. Maybe this will do better in areas like the Middle East where you have to keep an eye out for terrorists IRL. Will we see sucess in Northern Ireland too?

In Crowd Patrol you play against the clock – on this occasion a ticking bomb and you have to spot and shoot the terrorist before it goes off. Look at it like this – you’re saving lives. Or playing a more violent and topical version of Where’s Wally. Each wrong tap loses you 5 seconds.

We say:
Not exactly thrilling on gameplay, this has much more in common with Spot the Ball or Where’s Wally than any of the more exciting interactive games out there. It encourages racial stereotyping, violent feelings towards other people and doesn’t always register one’s taps.

We just hope no-one releases an Augmented Reality version of this and then choses to introduce a AK47 as an iPhone accessory. That would be madness.

One thought on “iPhone app Crowd Patrol wants you to spot the terrorist. And kill it.”