Ever thought you spotted a bit of Croydon in a film that is supposed to be set in New York? or wanted to go stroke the tarmac in the carpark where Robert Pattinson and Kristen Stewart have their first romantic eye lock? 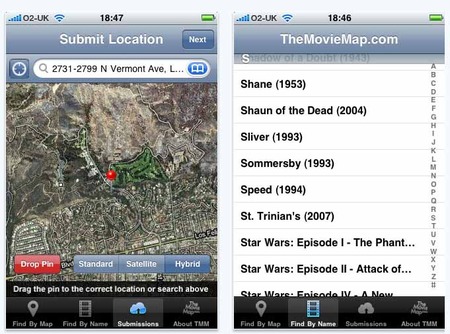 Well, an iPhone app promises to be your virtual Film Location tour guide, combining GPS and an information database to provide scene addresses and trivia details about each movie site. Features include two ways to perform searches and allows users to submit any filming locations they know about. They claim user entries are double-checked to prevent errors like “oh this field looks like that field in Harry Potter”.

With the map-heavy use we imagine it’ll nom through your battery. Oh and sadly the worldwide element of it will be curtailed by roaming phone data charges to all but a lucky few. However to browse further afield you can look on their website, which mashes up that information with Google Maps letting you look all over the atlas.

Oh and for your information, Bella and Edward’s high school in Twilight 2008, was filmed in Kalama High School in Kalama, Oregon. Now you know.