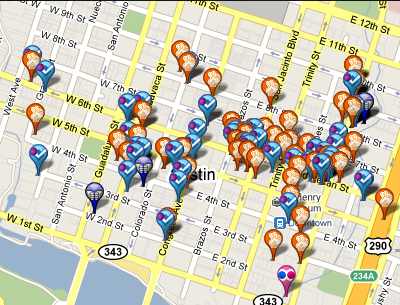 UK citizens are very used to surveillance cameras – CCTV are commonplace on city streets – but software that lets cameras automatically recognise your face is new. Venture capitalist Mark Cuban blogs that he has just put money into a company that does just that.

These cameras wouldn’t just film you, they’d recognise you coming in, match your face to a picture of your face in their log, and then could publish your arrival in their shop (or wherever they are). These would be check-ins, like Foursquare, but automatic and involuntary.

Currently the technology is used for more mundane uses like predicting traffic flow on streets, but Cuban predicts that the next step will be this facial recognition. He hasn’t revealed the name of the company on his blog, but that hasn’t stopped the commenters guessing.

But hey, you’re thinking, Debenhams (say) don’t know what my face looks like, they don’t know me from the proverbial Adam. Wrong. If you’ve got a Facebook profile, chances are they could find out what your face looks like pretty easily.

As Mark Cuban puts it:

“Facebook provides a database of 500mm people and their names from around world. While not all profile pictures are going to be valid in facial recognition software, most will. Few people exclude their basic name and picture information from public search, so FB could be the first to provide a database of names and faces to the commercial world of facial recognition.”

Given that people have qualms about checking in on Foursquare because it means people knowing where they are, there are going to be some serious “issues” about privacy with this one. But perhaps other people will like it. You won’t need to get your phone out and wait for the app to load up before checking yourself in.

If the practice of “checking-in” is effortless, it could go a lot more mainstream, with more people doing it, more stores getting interested in it and offering better stuff to their loyal customers.

We’re really interested in the implications here.. any thoughts?