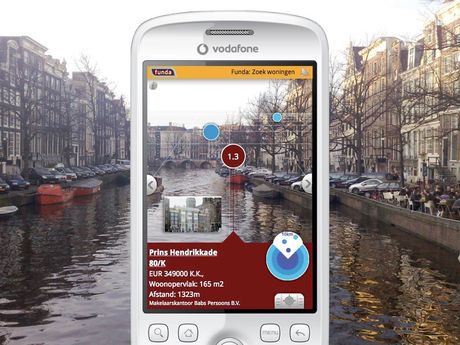 Here at Shiny Shiny we really like Augmented Reality – the technology that overlays reality with computer data and makes pictures, icons and tweets float over an image of the real world. We are soo into it. Layar is the platform that has brought Augmented Reality to mobile phones [by 2012, it will be on 3/4 of all smartphones sold] and developer Howard Ogden, maker of the Beatles Augmented Reality app and realestate app FindAProperty is one of their top developers. And a man with a lot of ideas.

He was in London last week and we had a little chat about augmenting reality. This was what he had to say about the changes in Layar and why the platform (available on iPhone 3Gs, 4 and Android) is still the best one going.

On Layar 3.5 and how it will force developers to up their game

This introduces Stream, their search engine for points of interest, it’s a big achievement. Because Stream will index points of interest from all layers, it means that users will spend more time on the search engine and less time on individual layers. They’ll need an incentive to click through to the layer, which is a challenge for developers. They’ll need to make their layers more engaging and interactive to persuade people onto them; by attaching a video or an online coupon to make it more interesting. I think that’s a good thing.

This brings in the social aspects, the floaticons. You can interact with the floaticons, feed them cookies, leave messages.. they’ll be like 3D characters. In terms of monetising, Layar are offering premium floaticons and the opportunity to leave gifts for people.

Why Layar is still in the lead

Technically, they’re very advanced. That search engine technology – no-one else has got that. It’s widespread and it’s very international: Layar will be installed in 1/3 smartphones sold this year, next year 2/3 and by 2012, it will be in three quarters of phones shipped.

Layar have a deal with Samsung and with the largest Chinese phone manufacturer. They get a lot of usage in South Korea – of course America is still the biggest market – but they have got a strong international base. Layar 4 is very geared to the international audience, I think they’ll really get the Floaticons in South East Asia.