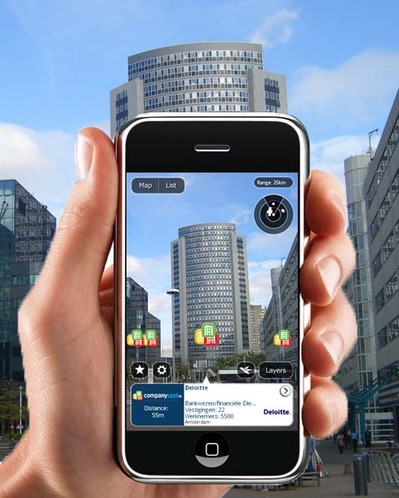 We asked Howard Odgen about some of the other people getting interested in Augmented Reality, Foursquare for example who recently released “layers” of their own. Though he remained a little tight-lipped about that, he did agree that it would be a big deal. Howard also described a little piece of work he did for Google and how he ended up demonstrating one of his apps to Google CEO and Larry Page. Let’s just say that if Google are interested in anything it’s pretty big.

Oh and we also asked Howard about a topic close to all our hearts – limited mobile internet deals. They suck. But will they affect people’s use of AR?

On Foursquare
[Foursquare recently introduced branded location layers – taken up so far by the Huffington Post, Shiny story here] When they open that up to third party developers it’s going to be a really big deal.

On limited internet deals becoming the norm
It’s a shame. The carriers got greedy. Since they set up the networks it doesn’t cost them so much to run them. Lots of people don’t use their full allowance but it will hit a small number of hardcore users: I ran up a 700 euro bill from O2 from 2 days internet usage in Amsterdam. You hear lots of stories like mine, sometimes worse.
The EU have capped carrier spend – with just Three being the only UK carrier who pushed for the cap. This is a good thing for the average users, but is probably the catalyst for the disappearance of true unlimited data. I don’t think it will have a huge impact on Layar, because it’s generally a small amount of data used, maybe user habits will have to change a little. People may start seeking out wifi hot spots more and monitoring their usage.They’ve got 4G in parts of America and South East Asia, and Google put a whole town on super fast wifi – it just shows it can be done. But there’s a lot of investment required for the networks to upgrade to 4G and here in Europe there’s not too much incentive right now. They are still trying to recoup the huge amounts spent on 3G licenses.

On giving a demo of Layar to Larry Page, Google CEO
I’d developed a Layar for Google for their Zeitgeist conference, always a good company to have on your client list. At the conference, someone tapped me on the shoulder and said, “Could you give Larry a demo?” There he was drinking a green tea, looking very zen. I ran through a demo of Layar, including our FindAProperty layer, and he said “Oh, very cool” at the end. It was inspirational to meet him.