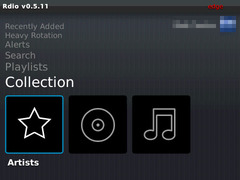 While we hope you haven’t exactly been holding your breath, the good news is that online music service Rdio – which you may have heard about way back in 2009 – has finally arrived. Well, in the US, anyway. But according to their blog this Spotify rival will be available in other parts of the world ‘soon’.

Rdio is the brainchild of Niklas Zennstrom and Janus Friis, the pair who created the controversial file-sharing service Kazaa and later redeemed themselves (and paid the legal bills, presumably) with Skype. For a monthly charge, users can access a catalogue of major label music, streaming or saving their favourite tracks to PCs, iPhones and Blackberrys. Don’t panic if you’re an Android user – word on the street is that an app is on its way for you, too.

$9.99 will get you Rdio Unlimited, giving you both web and mobile usage, while a $4.99 gets you the web-only Rdio Web package. A caching feature means you’ll be able to store music on your mobile without blowing the 3G budget, and with Warner Music Group backing the service we guess you could soon be listening to anyone from The Doors to Red Hot Chilli Peppers on or offline. (Unfortunately, Michael Buble is probably an option, too.) There are also suggestions that EMI and indies Orchard and INgrooves could soon be a part of the Rdio package.

Rdio’s competitors are likely to be Rhapsody, Napster and the lesser known Mog All Access. And of course Spotify when it launches Stateside. But, with all eyes – and ears – on Spotify in the UK, what can Rdio really do to recommend itself to the discerning British listener? Well, it seems that this music service will include several social elements. So you’ll be able to follow friends and find out what they’re listening, and hijack other people’s playlists when you’re lacking inspiration. This does however mean you’ll have to give up that filthy Nickelback habit.

Will you be tuning in to Rdio when it touches down in the UK? Or, in the time they’ve taken to get up and running, has Spotify already won your heart?