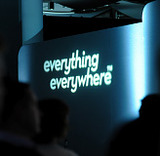 We’ve just seen the logo of new British uber-network Everything Everywhere – the product of the merged T-mobile and Orange networks, that’s it on the left.

The company will be massive – with over 30 million customers – but the rebranding has hit a dud note with blogs saying it sounds a bit well, vague.

Paidcontent say it sounds more like a motto than a name.. Employees of Orange and T-Mobile are joking that they now have to work for everything everywhere (ramping up the job remit quite a bit), and someone on Twitter saying it’s worse than “Telecom Italia Mobile Brazil’ (and that’s surely pretty bad).

It will have to compete with Everywhere-Everything.com, a travel blog company for Google Rankings.

So casting aside the marketing wisdom behind this rebranding, what would you, Shiny Reader, have called it?

One thought on “Shiny Poll: Everything Everywhere – that rebranding in full & what they should have called it”