The new Palm Pre Plus and the Palm Pixi Plus will be hitting UK stores at the end of May – we had a little look at them yesterday and talked to Paul Ghent the VP of Palm Europe. Till the specs come out officially, here are our first impressions.. 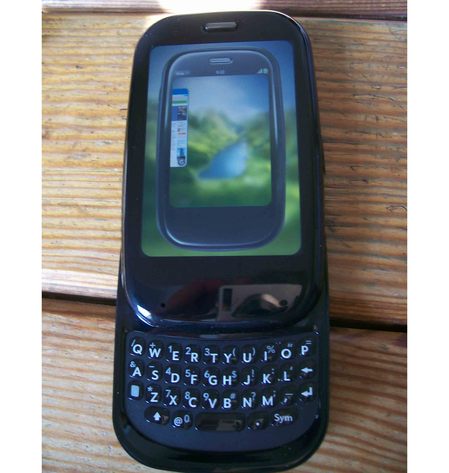 So what’s new?
Well, it’s not exactly a hardware revolution: there have been some updates to the Pre and Pixi – more storage (16gb in the Pre Plus), increased ability to mulitask (you can have more windows or ‘cards’ open), they’ve taken the button off the bottom of the screen and tightend the keyboard up.

The conductive case which lets Palm devices charge up on a “touchstone” device now packs with the Pre Plus. Otherwise camera (3mp) and screen resolution are all the same.

Well that’s not massive change?
No, but Palm is really famous for its lovely software – the webOS – a smooth smart multitasking operating system. Palm also updates its software regularly: upgrades which all consumers get. Palm aren’t suggesting their customers ditch the old phone and buy a new one, but they are just updating and speccing up the current handset for new users.

Well that’s nice but how does it measure up to the big boys in the market? iPhone and Android?
The rolling software updates are a good deal for Palm customers. The Palm rep pointed out that now we’re increasingly bound into 24 month contracts, so not being able to get a software upgrade on your handset, as is occasionally the case with Android, means you miss out on a lot of functionality. Palm phones sort of grow organically with you.

Talking about adding functionality, have these things got any apps?
Well, nothing compared to the Android or iPhone stores, but.. wait, they’re working on getting apps that marry particularly well with the operating system. I’ve seen a sweet game by EA in co-operation with Palm.. beautifully integrated..

All about the webOS isn’t it?
Yes

They’ve just merged with HP haven’t they? What’s the goss there?
Well, not surprisingly they weren’t spilling any beans on the HP takeover.
The merger was announced a few weeks ago – it will be finalised in July.

But I mean, we’re expecting a tablet minimum aren’t we? The Pablet? the Palm-Pad? Or perhaps the HP Hurricane running that lovely smooth webOS that everyone was talking about last week?
Ghent said that yes of course the webOS had the capability to run on other platforms. So I think we can take as a yes. And nobody is too keen on that HP Slate we were hearing about it.. still in production, it’s apparently pretty slow.

We’ll post some full hands-on reviews of the Pre and Pixi later in the week.