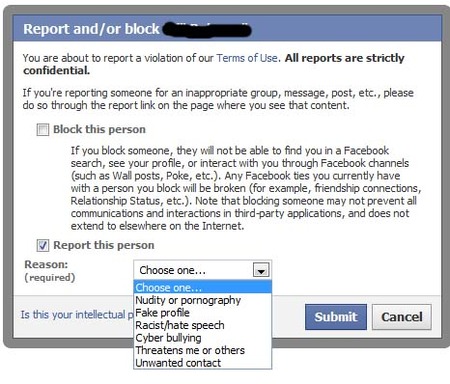 We reported a little while ago that some people were getting unfairly blocked on Chatroulette. Users would get blocked simply because their chat partners didn’t like the look of their face.

It seems like that similar behviour is happening on Facebook too: Muslims in Egypt have been cyber-bullying atheist Egyptians by reporting their profiles to Facebook en masse, according to ReadWriteWeb causing Facebook to shut down the innocent profiles. It’s e-intimidation, but it doesn’t look like much is being done about it. Facebook say they’re sorry but haven’t made moves to redress it.

When the French RWW journalist first reported on the gang -reporting, his profile was targeted too and shut down. The online harrassers use Facebook to create lists of people they want to be reported then organise their followers in groups, asking them to gang report the victim.

You don’t have to be friends with someone to report them, it’s an option on most landing profile pages even ones set to private, so anyone is vulnerable to this and it doesn’t look like Facebook is doing much to help people whose accounts have been wrongly shut down.

Interestingly in Facebook’s Help page about the Report function, it only covers how to report a different range of things. It doesn’t cover what to do if your page has been unfairly reported.

Related: Getting blocked on Chatroulette: how the report button is getting used wrong

One thought on “Blocked on Facebook: how cyber-bullies are "reporting" profiles and getting them blocked”