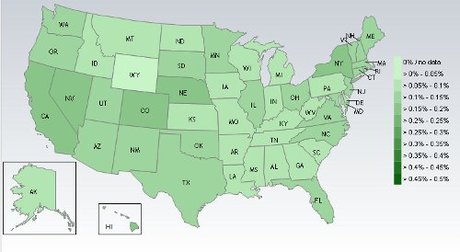 Apple must be delighted they underestimated the demand for the iPad but customers outside the US are pretty annoyed that it’s taking so long for the gadget to cross the Atlantic. So where have all those 1million iPads gone?

We know that Robert Scoble has bought three – that’s hardly going to change world supply and demand, but it is revealing, and research suggests that the area where the demand is strongest in indeed Scoble’s San Francisco region.

Researchers Experian Simmons have drawn up a list of the US regions where iPad demand is likely to be the strongest based on where Apple products have the greatest penetration: San Francisco tops it. (see map above)

Appearently San Franciscans are 49% more likely to own an Apple product than other Americans. That’s not just ’cause they’re in Silicon Valley, it’s also because they’re hip and technologically advanced. The lists continues as follows:

I just thought it would be interesting to correlate that with the 10 richest cities list from Forbes which is measued by median household income (from 2005, from 2004 census)

Well – the results aren’t super enlightening, but it shows that households in California are generally richer than elsewhere and are much more likely to be Apple customers.