You can now tweet your location from the main Twitter site. Location tags now pop up on tweets if the users choose to geotag. This means you can now see where they were when they sent it. On a map. It looks like this: 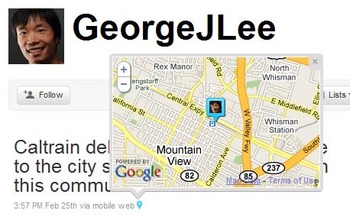 But is Twitter’s hook-up with location just a gimmick?

I guess since Twitter can introduce more location features, they have. There are no privacy issues since everyone has chosen to switch on the location. Clearly Twitter are trying to edge into location as start-ups like Foursquare and StickyBits do well there. It’s not a crazy jump, lots of Twitter clients allow geotagging already.

But just because they can, does it mean they should?

From how I see it now, it’s just a gimmick. I think that location is only useful when it is fully built into the structure of a service or app as it is in Foursquare where it actually matters where you are. It only occasionally matters where you are on Twitter and I guess that most tweets are sent from people at desks in the office, and knowing that isn’t very useful.

Most tweets are about where people are On The Internet – not where they are In Real Life. People are more interested in what website you’re on, than what street you’re on. It’s Perez Hilton or the New York Times not north Birmingham or south Birmingham.

Twittter might as well introduce it, but I don’t think the take-up will be massive. It’s for other sites to use it more smartly.