Err, this isn’t exactly a breaking news story, but I came across a photo and post on Flickr recently that shed a little light on the inner workings of the world of tech, and though the gender imbalance in technology may be something chronic, it seems that women who do work there don’t do too badly in some respects.

And, yes, I mean in respect to getting free tampons. 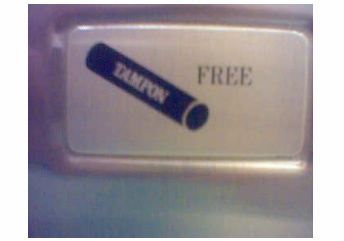 Popvulture, a Flickr user and former Microsoft and Yahoo employee posted the picture above, and shared some insights into working life at the tech giants:

After having worked at Microsoft’s campus in Mountain View for 2 years followed by the last 3 years spent at Yahoo!’s campus in Sunnyvale,” she says. “I’ve come to the conclusion that while it may not always be easy to be a woman working at largely male-dominated technology jobs in Silicon Valley (I’ve had hundreds of meetings where I was the only person in the room of the female gender) — the free tampons found in the women’s restrooms on these tech company campuses are a nice goodwill gesture.”

And it’s not just a nice gesture, they actually make for a valuable financial contribution too, apparently. Popvulture goes on:

“In fact, they may be one of the more valuable benefits we receive. Seriously, have you checked the prices that a box of tampons sells for at Walgreens? Those things aren’t cheap! How can some cotton and string (and possibly carboard) cost $6 per box?! When you take that into account, Yahoo!’s free tampons are almost as helpful a money saving benefit as the free lattes. What say you? P.S. Does anyone know if they have free tampons at Google? ;)”

Well and do they have free tampons at Google? Fortunately some commenters were able to shed light on this question:

Boo d shared some knowledge about Apple:
“i don’t know if google offers free tampons, but apple does. i think every woman at yahoo appreciates this perk. i have a lot more specifics to add, but i’ll have to tell you in person.”

carrievision told us about IBM
“Interesting. IBM in Research Triangle Park also offers the free tampons, and I have to agree not having to carry a purse around or shove a tampon in your pocket is a very nice feature.”

leh4 says:
“in santa monica, we get free snacks but not free tampons. i see no logic here.”
[Does she mean the Google offices in Santa Monica? We think so – please add corrections in the comments.]