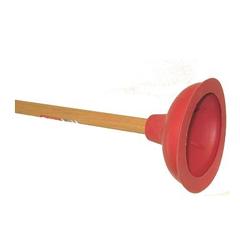 Inspired by a toliet plunger, a US medical student has come up with a cheap, simple gadget that cleans wounds and could save many lives in diaster areas.

MIT student Danielle Zurovcik was walking down a bathroom goods aisle in Kmart when she saw the plunger and noticed its connection to her medical work.

How does it work? Well after placing a seal around the wound it sucks out fluid and bacteria. There are commercial versions of these “negative pressure pumps” already available, but costing $100, weighing 10 pounds and requiring an energy source they aren’t practical for disaster relief.

In comparison Zurovcik’s pump costs only about $3, weighs less than a pound and operates on human power. Users press the hand pump, which is designed to operate like a spring. That creates negative pressure, which then pulls impurities out of the wound and sends blood to the damaged area.

Used on a small scale in Haiti and also Rwanda, they mean that there is less need to constantly change bandages on weeping wounds, which can be impractical when bandages are in short supply. It could also be used in developed countries for chronic wounds.