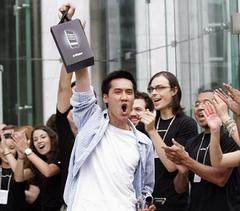 Picture the average iPhone user and I bet you are conjuring up some blokey geek in their 20s? Well according to new research from mobile advertising company Admob you are away off.

The survey, which also quizzed Palm Web OS and Google Android users, found that iPhone owners are split fairly evenly between the sexes and only 56% are male.

It seems twentysomethings might have to wait a few more years to buy one too as the average iPhone owner is in their mid 30s.

The survey also found that iPhone owners are addicted to apps with the average user downloading over 100 of them each year. Half of all iPhone users will also buy an app each month too.

Interestingly the figure for downloading apps was pretty symmetrical between owners of iPhone and Google Android phones. Android owners are apparently less likely to buy apps with only 21% purchasing an app on a monthly basis.