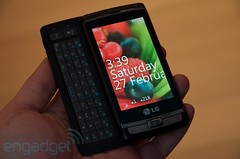 LG will make a high-end Windows Phone 7 Series handset coming out around September they announced in New York. Microsoft’s new Operating System for mobile phones should get a consumer friendly receptacle in the as-yet-unnamed LG handset.

Details are pretty vague but LG promise “a compelling and unique user experience”, a Bing search engine (of course)

According to some grabbed pictures on Engadget, the phone is a buisness-like QWERTY keyboard device with hard corners and it is certainly capable of showing pictures of raspberries on it’s homescreen (we imagine it has a few more tricks in its box, but we don’t want to get ahead of ourselves here.)

Apparently LG and Microsoft have been working closely together for a while to bring Windows Phones to the market. The display of the phone in New York was the first time Microsoft has displayed Windows Phone 7 Series on a branded phone.