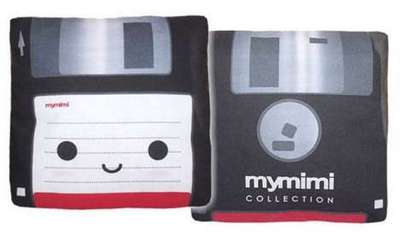 Praise be! some one has made a floppy-disk pillow (or indeed cushion as we call ’em in the United Kingdom).

Geeks have been actively making techie-themed cushions for a while, a phenomenon we covered in Great Geek Cushions. I guess cuddly tech stuff combines the geek’s interest in techie paraphrenalia with their innate desire to huddle, crouched in the fetal position their arms wrapped tight around something soft and yielding. Sometimes the cat moves too fast and a pillow shaped like a floppy disk is exactly what you need.

I’d like to see other information storage devices repurposed as pillows:

Memory Sticks:
These would be usefully long and thin and would work well as ‘back of the sofa’ or other lean against pillows.
lol factor – 3/5; 4/5 if they had removable caps
cuddle factor – 5/5

CDs:
Traditionally disk shaped, these would be nice and useful. I’d suggest some reflective thread woven in to get the shiny effect.
look factor – 4/5

Books:
Yes, these are information storage devices of a sort, they’d also make cool cushions if they had a fold in the middle and you could put your head in the centre and fold it up, burying your head in the cushion with maximum efficiency.
ability to cover your head with pillow factor – 5/5

Buy the Floppy Disk pillow from MyMimi, for $18.99 on Etsy