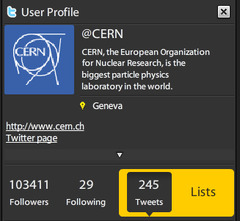 I was a bit alarmed to see on Twitter that the scientists at the CERN Large Hadron Collider project in Geneva were cowering in nuclear bunkers:

RT @CERN: …Preparing for collisions now!! <---- *cowers in bunker* popped up in my Twitter feed.

Turns out, of course, that they’re not. At first I thought that CERN is some fake account set up to mock the CERN Large Hadron Collider project. Cheryl Cole’s got a fake imitator account, why shouldn’t the world’s largest science experiment?

But no, @CERN is the genuine Twitter handle for the CERN Large Hadron Collider in Geneva. But – as you might expect – they hadn’t actually Twittered anything like this:
RT @CERN Phew, am I glad I bought a nuclear bunker. Wait, is this thing on ?

It has never occurred to me before that you could do fake retweets. But of course it’s super easy: type “RT” and your target’s name “@CERN” for example. So full marks for inventiveness to whoever came up with the humourous idea of fake retweeting.

Gotta say CERN’s orginal tweet stream is ripe for some parody retweets.Genuine CERN tweets include: “Operators are stabilizing the beams… yes, we’ll attempt to collide them soon!” [Tue 30 Mar, 11.49] and:
“Beams will be collapsed soon! Then a new stabilization will be needed before experiments will be able to observe the first collisions.” [Tue 30 Mar, 11.56]

But does fake retweeting break the trust on Twitter? If everyone starting making crap up and attributing it willy-nilly things could get even more confusing on Twitter than they already are.

Fake ReTweets are confusing than just a unofficial or fake account like @fakedailymail – which is consistently a parody, it’s a bit bewildering when tweets are sometimes reliable and sometimes not reliable.

Fake retweeting opens the door to some great jokes and a pretty dodgy way to spread rumours. Thing is though, we all get worried about these things, but I think we underestimate our own capacity for knowing what’s true and what’s not.

Sure you might say it confuses facts even more but on stuff that counts, I think we know when people are telling the truth. I think…

Know any good fake retweets? – stick them in the comments below…