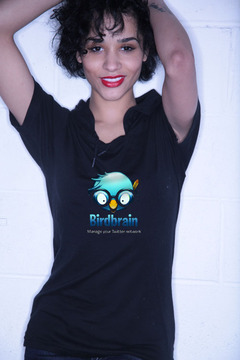 Musicians have been using the internet to cut out the middle man for a while through fan-funded records and suchlike – and it looks like fashion models might be starting to do the same thing.

A site called She Wears Your Tee does just that and was started by Tanaya, a fashion model who lives in New York. She says:
“Companies such as L’Oreal, Estee Lauder, and Lucky Jeans have hired me for thousands of dollars a day to help promote their brands but I am offering my services to you for a fraction of that cost.”

The deal is: you book a day of the year you want Tanaya to wear your company t-shirt (or hoodie or whatever) and she’ll do it and post a professional photo shoot picture of her in it on her site along with a little enthusiastic write-up of your product. The price of hiring her to wear your tee goes up by $1 a day, so Jan 1 started at $1, Jan 2 was $2, and so on.

She says: “Don’t miss out on this great opportunity to gain exposure, generate brand awareness, and use a beautiful fashion model.” It’s a clever pricing plan I guess, encouraging people to get in and book early.

I suppose if you break the modelling industry down to its bare bones it is basically paying people to wear clothes. And whether that’s a Dolce and Gabbana onesie or a Fruit of the Loom T-shirt with the icon for a Twitter app printed on it – it’s same thing: paying someone to wear something and taking a picture. In traditional situations the models go through a modelling agency who take a hefty cut of the profit. As in the fan-funded music model, the internet lets you get out there and get paid without having to go through middle men.

Full marks to Tanaya for effort in the write-ups as well: she’s got a few things it’s tricky to get very excited about, but she sure does try.

I still can’t see this working totally on a mass scale – the focus and thus the advertising value will be stronger if there are just a few people doing it rather than lots, but still, if models were able to build up enough of a character and a look to gain a fan-base then it could be profitable and people may be keen to get their company logo on someone hot.

Particularly in the tech sector. Goodness knows the tech world could do with a little glamming up from time to time.