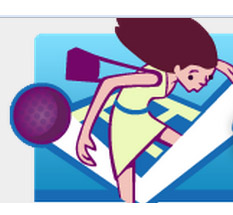 The location-based game Foursquare has been rocketing to success with US visits to the site jumping 50% in January according to Hitwise. We reviewed the app back when it hit London in October, but looks like it’s finally taking off, and with such impressive growth figures it looks like Foursquare could be 2010’s Twitter.

“Our growth curve no longer looks like a hockey stick. It looks like a skateboard ramp with 4 feet of vert. Bananatown.” the company said last month.

Foursquare is a location-based social network based around going out: users upload venues and places they like and can see what their friends have uploaded. It’s a mobile phone app first and a website second: a smart business plan these days. The gaming aspect comes from making you the mayor of the places you upload or visit the most, and it gives you points and badges according to how often you go out.

Five reasons why Foursquare could become as big as Twitter:

1. The rise of GPS-enabled smartphones. Apparently FourSquare CEO Dennis Crowley has been trying to make location-based games work for a while, but I guess it has takes time for enough people have GPS-enabled phones to make use of the service.

2. Foursquare actually uses location. It makes sense to have a social network that fully harnesses location. Sure you can tweet and update Facebook on the move but apart from being on a smaller screen the experience is basically identical. With Foursquare it actually matters where you are. You can only check into the Oxford Street TopShop when you’re in the Oxford Street TopShop. Okay, you can geotag tweets, but there is rarely much incentive to do so.

3. Wiring a gaming aspect into a social network makes it a bit more addictive. And it’s not just a status thing – as you contribute more you’re actually building up a useful store of information for you and your friends.

4. It builds on existing networks, while doing something a bit different: Foursquare’s integration with Twitter and Facebook should see it spread from geek circles to non-geeks a little more quickly.

5. FourSquare is becoming an app platform. This will be interesting. They’ve released an API for third party developers to make stuff that uses what Foursquare does. Already they’ve integrated with some big media brands – Bravo TV for example, allowing fans to win special badges tied to places featured on the cable network.

Related: Foursquare hits London, but what is it good for?