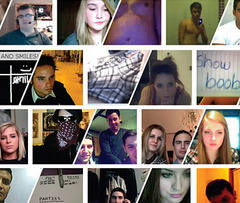 Everybody’s favourite new NSFW video chat website seems to be Chatroulette. Like Skype gone bad, it’s a simple video chat service that requires no log-in, no registration and confronts you with a succession of complete strangers in one-on-one video chat.

Full marks to the anonymous site creators for making Chatroulette easy, just go to the site, click Start, it auto-detects your webcam and suddenly you’re hurled into a baffling stream of face-to-face video encounters. Chat to the person you are confronted with over the microphone or by text or click Next and ditch them for the next one.

It becomes like a terrifying live version of hot or not, where you can see people’s faces or occasionally genitalia for a brief instant before they, or you, click next, looking for someone hotter, weirder or nakeder.

It is an alarming but addictive experience. Suddenly, you can see into the bedrooms of complete strangers from all around the world. Given the amount of naked men, it’s not really somewhere you go to find interesting conversations, but it takes you right back to the good/bad old days of the internet before you had to log in to everything and when chatrooms were full of weird sex-starved loners.

Why you’d go on..
If you dig voyeurism, this will be great for you. If you don’t, it’s a bit scary to do by yourself. It’s probably best to do with a friend when you’re drunk so you can be like “oh my god”, giggle and counsel each other afterwards.

Kottke says: “I observed several people drinking malt liquor, two girls making out, many many guys who disconnected as soon as they saw I wasn’t female, several girls who disconnected after seeing my face (but not before I caught the looks of disgust on theirs), 3 couples having sex, and 11 erect penises.”

Sam Anderson writing in the NYmag was intially battered by getting passed over several hundred times in 20 minutes, but he came to realise, clicking next is the point: “Eventually, I realized that clicking “next” was not so much a rejection as it was pure curiosity, like riding a train past an apartment building at night, looking briefly into as many lit windows as possible”.

According to the NYMag the creators are anonymous and tracing the source back leads to a shield in the Netherlands. Apparently the site launched quietly in November, and at the beginning of February had 10,000 users.

Feeling brave? Far away from your boss? Try it here: http://chatroulette.com/

One thought on “Chatroulette: video-chat with randoms on scary but addictive new site”