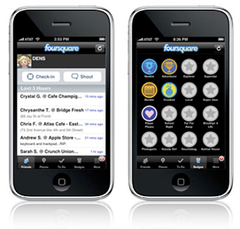 A mixture of twitter, a city travel guide and location game, FourSquare was released in London this morning, to an enthusiastic buzz, some confusion and a few unimpressed “mehs”. The hypey new iPhone and Android app has already been set up in about 30 cities around the world, mostly in the US. What exactly does FourSquare do and should you really be interested in it?

So what does it do?
Well, Foursquare lets you see little comments and tips that people have left pegged to locations in London. You too can leave these tips reader, call them geo-tagged tweets if you will. Like some kind of game, you get rewarded for leaving more tips by being given badges. You set up a minimal profile, and add friends and can also contact your friends over the service.

What do people say?
Things other people have said include:
@The Bricklayers Arms “try the cherry beer” via David S.
@Ray’s Jazz Cafe “Order the apple cake and sit on the leather chair” via Alexandra S.
You see the tips and shouts that are located near you, then there’s a map showing the location of the venues. People genuinely have quite interesting things to say, though some are dumb. Like mine.

Should I be excited by FourSquare?
Well, if you’re city-living networker who likes talking about what you do, AND have an iPhone AND the push notification is switched on, then yes Foursquare could be quite fun. The game aspect is interesting, visit and review enough pubs and you get a badge, perhaps the Crunked badge; range widely and leave tips and reviews all over London and get the Explorer badget. Visit somewhere enough and become the FourSquare Mayor of a location. In theory, this will keep people coming back.

I don’t have any friends.
Ha ha. No seriously. It’s a problem for the early adopters isn’t it. But this lets you import friends from your email contacts, and better, from your twitter account. Yes, you’re giving them a lot of information – phone number, email and err, where you are, but hey that’s how it goes these days.

Who is going to like it?
Well the twitter crowd will find it similar to Twitter, just pegged to locations. The social networking is made a bit more interesting by the possibility of real networking. Passers-by might find it useful as a restaurant guide/ tips hoard – is that cherry beer any good?

Can I just add: the language is cute: “Uh-oh we can’t find the internets”.

What will people complain about?
1. It’s not going to be loads of fun till everyone’s doing it.
2. Foursquare is yet another what-to-do-in-a-city app, there are a lot of these already, and it’s not much use if you don’t live in London.
3. With the tips and shouts, there’s the old User-Generated-Content debate – it can be great if the users are articulate and interesting, not so much if they’re not.
4.There are a few privacy issues: you have to give a phone number and email address and (of course) information about your location. Only your friends get this, but not great if you’re worried about crazy stalkers.

Will enough outgoing, iPhone-owning, London-living people use it? Will it just languish on page three of their iPhone home screen? I don’t know. I think location-based games are fun though and expect some more developments here.

One thought on “FourSquare iPhone app hits London – but what is it good for?”