Looks like fans of the Twilight film series are suffering more than unsatiated desire in the run-up to the release of New Moon on Friday. An internet scam preying on fans of the series has leveraged a fake virus alert to get people to hand over their credit card details. 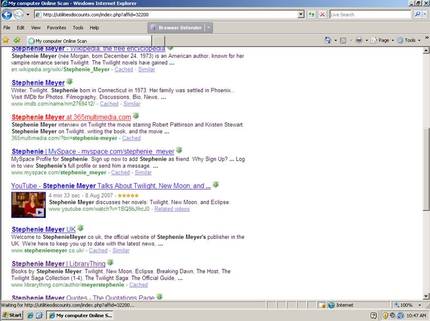 But pctools.com reveals that the entry is a scam. This is what happens:
• When clicked on, this link then redirects users to a window informing them that they are infected with malware and they are then advised to download a fake antivirus software product to get rid of the infection
• As they download and install the fake antivirus software they are asked for credit card information
• Malware is then installed on the user’s computer and any financial information entered is sent off to cybercriminals – and no one gets any information about Twilight

PC Tools (a company that sells anti-virus software) says that this “Vampire Byte” is just the tip of the iceberg for Twilight fans and that more scams around Twilight will be coming out in the days to come.

So, devoted fan… even if a website offers you a massage session from Robert Pattinson don’t give them your bank details.