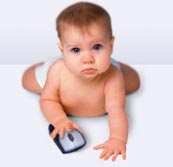 A-list geek and FriendFeeder Louis Gray has blamed Facebook for not telling him that his sister had had a baby.

Relying on Facebook rather than the telephone to get news out to friends and family, his sister and her partner had updated their status all the way through the labour and the birth. Unfortunately thanks to Facebook’s news filter it didn’t quite work as they hoped.

Louis Gray was checking the News Feed the day the baby was born and the day after but didn’t see any of the status updates about the birth that got sent out. Facebook automatically filters the News Feed down to what it thinks you’re interested in and it didn’t think he was interested in the birth of his nephew. Ow.

Of course, it’s hard to totally fault Facebook on this one – Louis’ sister could have rung him, and he could have checked her Facebook wall.

But this is how he found out:
“I saw a friend from high school make a mundane update, saying he had a good weekend […] I clicked through to his wall to see if he hinted at the good weekend. At the top of his wall, I saw something truly interesting. A simple update, his wall said, “Don likes Malinda Gray’s photo.” Malinda is my 23-year-old sister. Why would he be looking at her photos? And what photo?

“I clicked through, and to my surprise found out that my other sister, 28, had given birth to a new baby boy, her first, making me an uncle. Wow! After more investigation, I found that my sister, as well as my mom, and also the mother of the child, had made posts on Facebook throughout the day Sunday on the progress of the labor, and how things had gone. I also found out that my sister had actually gone into labor and started that process around noon on Saturday – the previous day, and that I had absolutely no clue.”

The implication of course is that Facebook doesn’t isn’t doing a very good job of gauging relevancy. In the long and slightly comic blog post he lays into Facebook for failing to do just that.

Facebook uses frequency of Facebook interaction to judge your interest in a person. But of course it’s hardly a failsafe guide given that a lot of social interaction still goes on outside Facebook. However, until Facebook starts accessing your email or mobile phone messages, or just plugging directly into your brain, it’s all they’ve got to go on.

There was a similar problem recently with the reconnect feature where Facebook suggested that Facebook friends who hadn’t been in contact with each other for a while reconnected. This led to husbands being asked to reconnect with their wives and other slightly ridiculous and vaguely insulting scenarios.